Equities your choice of refuge against the next storm

Equities Your choice of refuge against the next storm

I read commentaries from and listen to a lot of investment managers. They are mainly equity managers, since I don’t see the point in discussing whether bonds already yielding less than 1% can end up yielding zero or even less. Yes, you could have made money chasing yields down to negative in German bunds, but this really is “greater fool” investing, which as far as I’m concerned means it isn’t investing at all, but speculation pure and simple.

Most equity managers are nervous, and very few are bullish. They’ve all got the same charts, which show that in developed markets, share prices have risen much more than dividends or earnings over the past 5 years, and they know that share prices cannot go on doing so. Nor can dividend payout ratios keep rising – in fact, most fund managers expect UK companies to hold onto a good part of their sterling windfall gains rather than pass them onto shareholders. Naturally, there are high-growth exceptions, but not that many among large companies and virtually none among the “nifties”, the “growth stalwarts” like Diageo and Unilever where PE ratios are now miles ahead of any likely earnings growth in the foreseeable future.

In fact, the projected rates of growth in earnings in the US, the UK and Europe are pretty lacklustre and only an improbable upturn in GDP growth would give them a boost.

With that, and the steep rise in share prices since 2012, on the table, it’s no wonder investment managers are looking for hedges. In true investment parlance, an equity hedge is something that is likely to go up or at least stay level when equities go down. With bond yields so low, the traditional offset of bonds and equities is unlikely to work. Anyone switching from equities to conventional bonds now may just be rearranging deck chairs on the Titanic. It’s quite plausible that both bonds and equities could fall together if we have a proper bear market.

Cash remains the only asset which can be guaranteed not to correlate with equities – except in conditions of hyperinflation. But with inflation heading up – see the inflation projections chart below – most investors are reluctant to embrace an asset which will, in the UK, probably return minus 3% in 2017. 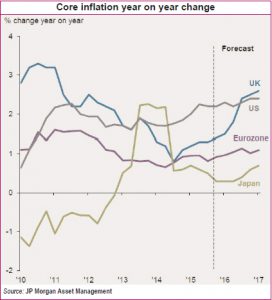 The worry the chart reveals is that this is not just a one-off currency blip, but the start of a global upturn in inflation. Most economists think this is a remote possibility, but what do they know? Their models have proved so consistently useless at predicting anything important since 2007 that I take their comments with ever larger pinches of salt.

So we have serious downside risk in both bonds and equities and rising upside risk in inflation. What should you do about those risks in your portfolio?

Perhaps if you have a 10-year timeframe you can be stoical and pull the blanket over your head. And if you are still adding to your investments and the time when you need to draw on them is 10 years or more ahead this may turn out fine. But if, like me, you expect to be drawing on your investments soon, and moreover you expect to be drawing more than the natural income they produce each year, you need to take action.

Here is what I have done and am planning to do.

Buy gold as an insurance policy. Back in the 1960s and 1970s every Swiss gnome held 5%-10% of his assets in gold. Swiss wealth managers did this for every client. They didn’t do so to make money, but to avoid losing money.

I suggest you adopt this approach to gold. How much of it do you need as insurance? I would say 5%-10%. I am up to 10%, split 70-30 between gold equities and gold bullion. I can envisage raising the allocation to 15% but have no plans to do so.

Among the contrarian managers who hold gold at the 5%-10% level are Alistair Mundy at Investec and Steve Russell at Ruffer.

Gold equities are several times more volatile than bullion, so a more sensible ratio might be 50- 50 in bullion and equities, or even 60-40.

Should you trust gold Exchange Traded Funds? I do. Certificated and audited gold bullion in vaults in New York or London is good enough for me. I don’t think you would escape the kind of systemic crisis that would cause these ETFs to fail by holding physical gold in the form of small bars or coins.

If we get a serious “funk” in China, it seems likely to me that Chinese investors will seek the safety of gold. But almost any geopolitical crisis is also likely to benefit gold. As for the old “US$ up, gold down” mantra (and vice versa), I think trusting this relationship to persist in the postQE era is daft.

I don’t own any conventional bonds. But, like Ruffer, Personal Assets Trust, Troy and other “defensive” managers, I do own index-linked bonds and am adding to them. UK index-linked have had a tremendous run (up 25% since May 2016), mainly because of shortage of supply and high liability-matching demand from pension funds. So I now own funds that invest globally, which means holding a big slug of US Treasury linkers.

At present I have 5% in linkers but will raise this to 10% shortly and perhaps to 15% over the next few months.

I would have bought an index tracking fund but for the disparity between UK and US linkers, which means an actively managed fund could and should add some value by altering the proportions held.

The one developed equity market that doesn’t look absurdly expensive is Japan (last covered in Issue 381). The big manufacturers have relocated a lot of production overseas, so benefited from the fall in the Yen from its peak. They are still expecting substantial earnings gains over the next year.

The economic outlook is not great, but “Abenomics” is in the last chance saloon, and both government and central bank (with a gigantic ongoing QE programme) seem determined to generate inflation and wage growth. And at some point, all that QE does seem likely to send the Yen lower again.

Meanwhile, despite the conventional view of an ossified economy, Japan is the world leader in one of the big industries of the future, robotics. And modest deregulation is giving disruptive new competitors with established businesses the same chances of meteoric success we’ve seen in other places – but at far more modest valuations. The banks, too, are modestly valued and are in better shape than European banks.

There are huge disparities in value between different groups of stocks in the Topix index, so I wouldn’t want to own a tracker fund. And I wouldn’t want to hedge the currency at present – as with the UK, a fall in the Yen is likely to be instantly reflected in higher share prices, but as we’ve seen recently with Japan, QE doesn’t necessarily mean a plunging currency.

Growth equities have outperformed value since 2010, and by a goodly distance. Because of the uncertainty about the economic outlook, investors have paid more and more for businesses where they feel confident they will get some growth. So the “growth stalwarts” are now overpriced except in the eyes of Buffett-style zealots like Terry Smith at Fundsmith and Nick Train at Lindsell Train.

The historic evidence is that it’s not just the quality of the business but the valuation when you buy that you need to worry about. “A trend is a trend… until it stops.” Reversion to the mean is the norm in financial markets. Over the long term, value has trounced growth. Why shouldn’t it do so again? The only possible reason is because “This time it’s different”. As Sir John Templeton said, those are the four most expensive words in stockmarket history.

So as far as developed markets and established companies are concerned, I think it’s time to buy value. This will work out well if growth picks up – cyclical businesses will benefit more than the growth stalwarts. If growth remains lacklustre, there are still plenty of cyclical businesses that will do OK and which can be bought cheaply today. So I own actively managed “value” funds investing in global equities (covered in Issue 381). If you are getting enough yield from these investments you may even feel you can hold them through a downturn.

Absolute Return funds that aim for a “cash-plus” return with much less risk than equities are showing up in more and more multi-asset and discretionary fund manager portfolios.

I’ve been studying and owning these funds since 2008. I think they should form part of most investors’ portfolios today. The more cautious your attitude, the more you should hold in these funds.

I split my holdings between genuinely defensive funds, with maximum downside of below 10%, and those aiming for “LIBOR plus 5%,” where the downside is between a third and a half that of equities.

As I have said before (most recently Issue 379), China is succeeding in its transition from an investment-led to a consumer economy. The journey is going to be volatile. But from the perspective of the authorities, one thing is clear. A runaway property boom would be a disaster both economically and socially. Fast-rising house prices in the major cities are already causing both social and lending problems. So the government will do its best to prevent this.

But Chinese savings rates are high. Where can the money go? A bull market in shares is highly preferable to a property boom. It has some beneficial economic effects and will have far less damaging ones when a bear market comes along.

I expect the government to sell off stakes in many state owned enterprises, starting with the banks after a mainly cosmetic clean-up of their balance sheets.

China is now the locomotive of South East Asia, and prospects for the region are good. So I own China-heavy emerging markets funds and pure China funds.

It is at least a plausible scenario that a rise in interest rates in the West causes a bear market in developed market stocks that has very little effect in China.

When evidence shows a much higher fraction of Chinese savings is going into shares, it will be time to sell.

ITV back in the picture

Is M&S a Christmas gift

A last Autumn Statement stand for the chancellor

Highland Gold From Russia with gold