The tide turns for China and emerging markets

Telecom Plus a steady provider on the growth track

Global income funds the obvious post BREXIT choice
UK equity income funds, which are a core holding for many UK investors, are subject to greater risks after the BREXIT vote. The majority of these funds hold a high proportion of capital in large cap stocks and these are the businesses most subject to uncertainty. Will they move operations, headquarters or even listings away from the UK? How long will it take until the leaders of these firms have any idea what the best course of action is? In the meantime, they are likely to put any major investment decisions regarding the UK on hold.

In any case, UK dividend distributions have risen steadily since the financial crisis, at a faster rate than profits. That cannot continue. So prospects for growth in income distributions from these funds are not great.

I now own no UK equity income funds but hold several global funds using similar styles and strategies, and there are plenty of choices out there, with initial dividend yields of 3-4%.

I last reviewed these funds last December (Issue 374). Now, as then, Scottish American Investment Trust (SAINTS) trades at a 5% premium to its net asset value, and if it were not for this I would own the trust and recommend its shares. Perhaps more turbulence in coming weeks will provide a buying opportunity.

If you do want an investment trust, then consider the £1bn Murray International, yielding 5.7% and on a 1.8% discount to NAV. The longer-term record of manager Bruce Stout is good, but performance has been relatively poor over the past two years, largely because the fund has only modest US exposure (12%) and almost nothing in Japan. In its favour, it is more widely diversified and defensively managed than many “international” funds that slavishly follow benchmarks and therefore allocate around 50% of their equity holdings to the US.

As is usual in times when volatility rises, Newton has done well since last autumn. The managers remain broadly bearish and their portfolio is heavily invested in huge, solid global businesses that can weather any storm. In contrast, Artemis Global Income owns few such large-cap stocks and is more actively managed, with manager Jacob de Tusch-Lec having moved into more cyclical companies last autumn. This has held back performance in recent months, but previous such moves have been well-judged. Finally, Invesco Perpetual Global Equity Income applies the traditional “value” style used by many UK equity income managers.

In addition to the dividend growth argument, I believe sterling is likely to be weak for years as a result of BREXIT, which adds to the strong case for UK investors increasing their overseas exposure.

Gold is the only game
The BREXIT has brought about one certainty – more uncertainty. And regardless of how the exit actually pans out, you can be sure that every little question, every political hesitation will be seized to create more.

The reason is that fear causes panic, and if someone can reasonably predict that panic, they can make money from it.

This situation will be with us for the foreseeable future, as it bounces from country to country in Europe and spreads across the rest of the world.

Events that start more market turmoil will include each suggestion that an EU member is seeking reform for itself, or the possibility of its own exit vote; any progress in the UK for Northern Ireland or Scotland to break ranks; any suggestion that EU exits talks have stalled or are not positive – for either side.

No doubt at some stage certain sectors – perhaps banks and builders – will appear to be so attractive that you can no longer ignore them. Be prepared for a rocky ride, but be prepared to be contrarian.

Start with gold. I shall resist the temptation to say I told you so, because I had not anticipated BREXIT as a reality. But the result is the same, with prices for gold bullion and gold mining shares hitting levels not seen since 2013.

After a big price rise on Aftermath Friday is there still time to get aboard? I think yes is the answer. The chart suggests that gold has two previous levels of resistance to overcome, both inside a further 7.5% increase – not unlikely and actually probable in the current environment.

The June 2016 edition of Gold Demand Trends from the World Gold Council revealed that in 2016 Q1 gold ETFs saw a 21% cash inflow increase on the year before, reflecting global anxiety well ahead of and in addition to Britain’s EU decision. The 364 tonnes added represents the second largest growth quarter on record.

ETFs are the perfect easy in/easy out way to get gold into your portfolio. The SPDR Gold Trust ETF – GLD – price is over $125, with resistance at $129.21 and $133.69, about a 10% leap. It’s a good solid performance, but it’s not one-way traffic. Profit taking – who wouldn’t after 4 years of waiting – left the improving price trend faltering for a while in April, but BREXIT fears kicked it back into play again in June.

Gold is the only game in town

Gold ETFs – either physical or synthetic, where no actual gold is held – are easy to buy. There are several listed in London, but it is just as easy to buy the bigger US funds where liquidity is assured – there are only 7 sovereign nations that have more gold than the US ETFs.

The chart describes the progress of the GLD price, were the pattern has played out as I described in The IRS Report last October, but now has more potential upside. Now having passed the January 2015 highpoint, a bounce from $124 would be very positive. I would anticipate highs of $143- $150, last seen as resistance in April 2013. The lowest you might expect the GLD ETF to reach is now $120, or the line created by the 50 day moving average.

The gold investment most likely to balance your accounts after the rout is goldminers. The Van Eck Vectors Gold Miners Trust ETF GDX is just 5% shy of 2014 highs – nearly 250% up on the January low of $12.40. 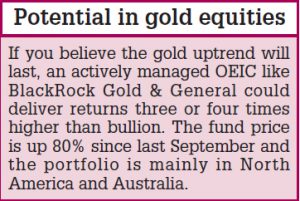 Overall remember that the gold market today is not the relatively stable haven it used to be. It’s an alternative, but is traded much the same way as equities, and is subject to similar influences, notably now the use of margin calls by City firms as a replacement for a traditional stop loss.

But still gold is the only game in town.